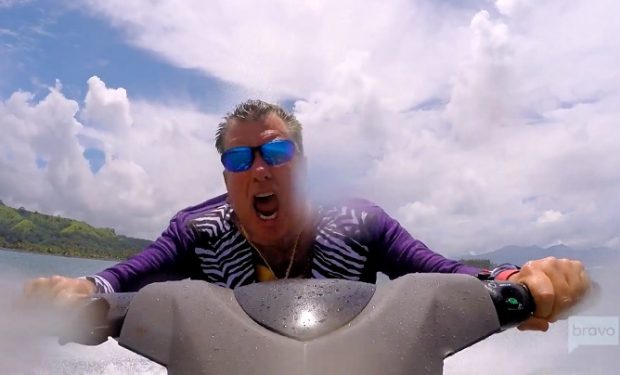 In the Below Deck episode “We’re Not in the Caribbean Anymore,” Captain Lee Rosbach and chief stew Kate Chastain welcome seven new crew members aboard luxury M/Y Seanna. For the first time ever, they travel outside the Caribbean to explore the tropical waters of Tahiti. What they’re not prepared for is the return of legendary charter guest, Foam Party Steve. While wearing a purple tuxedo shirt with zebra striped lapels and gold dollar sign medallions, Steve refuses a life vest and jumps on a ski jet.

[Check out Foam Party Steve on Below Deck in 2015]

The hard-partying hotel owner doesn’t just take the ski jet for a ride – he’s a wild man out there. The crew disagree over their responsibility for vest-less Steve. While bosun Chandler says, “I don’t think it’s a big deal,” deckhand Ross Inia says, “if something happens to him, we’re all f—ked.” It’s time to get Captain Lee involved! Last time Steve was on Below Deck was in 2015 in the episode “More Foam, Bosun!” — and yes, he wanted more foam, all the time in the water. Below Deck airs Tuesdays at 9pm on Bravo.