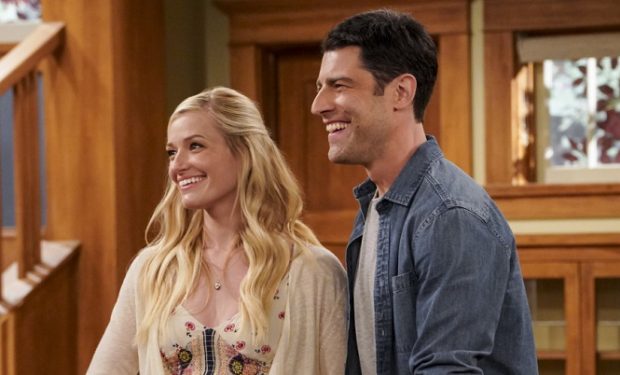 The new CBS sitcom The Neighborhood features the Butler family. The Butlers have lived in the same black neighborhood in Southern California for decades. So when an overly friendly white family from the Midwest (a small town in Michigan) move next door, patriarch Calvin Butler (Cedric the Entertainer) worries about keeping the culture of the neighborhood intact. Dave Johnson, the white Midwesterner husband, is played by Max Greenfield (New Girl). While promoting the show, CBS is headlining the male lead actors but let’s face it, the real stars are the female leads. Calvin’s wife Tina is portrayed by Tishina Arnold (Everybody Hates Chris, Martin). Dave’s wife Gemma is portrayed by Beth Behrs.

Behrs is best known for her roles as rich girl Caroline Channing on the CBS hit sitcom 2 Broke Girls which ended in 2017 after a six season run. Behrs was also in the 2015 film Hello, My Name Is Doris with Sally Field and Max Greenfield! (Behrs plays Greenfield’s girlfriend! See link below) The Neighborhood airs Mondays at 8pm on CBS, right before another new sitcom Happy Together.

[Check out Behrs and Greenfield in Hello, My Name Is Doris]

#fbf with my cowboy. Take me back to #Wyoming.