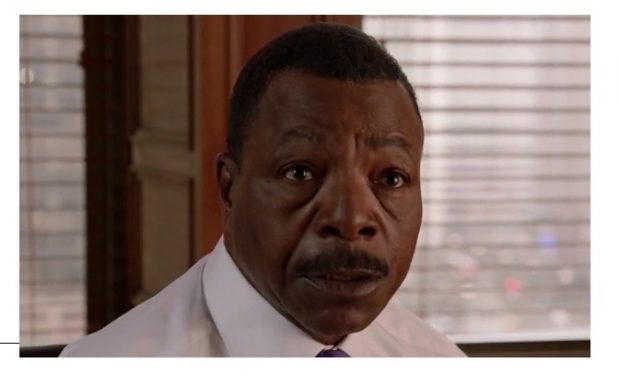 On the Law & Order: Special Victims Unit episode “Zero Tolerance,” Benson (Mariska Hargitay) and Stone (Philip Winchester) do their best to reunite young Scarlett Lopez (Gabriela Sosa) with her mother after the girl was rescued from a sex trafficker. During their investigation, Stone is reunited with his former boss from Chicago, State’s Attorney Mark Jefferies. (The two starred in the series Chicago Justice and Chicago P.D. together.)

SA Mark Jefferies is portrayed by Carl Weathers. The former NFL football player (Oakland Raiders) is also known for his roles on In the Heart of the Night (Chief Hampton Forbes), and Street Justice (Adam Beaudreaux), among others. Weathers is also well recognized for his roles as Apollo Creed in the Rocky movies, and as Chubbs in Adam Sandler’s Happy Gilmore and Little Nicky. Law & Order: Special Victims Unit airs Thursdays at 10pm on NBC, right after the new sitcom I Feel Bad.