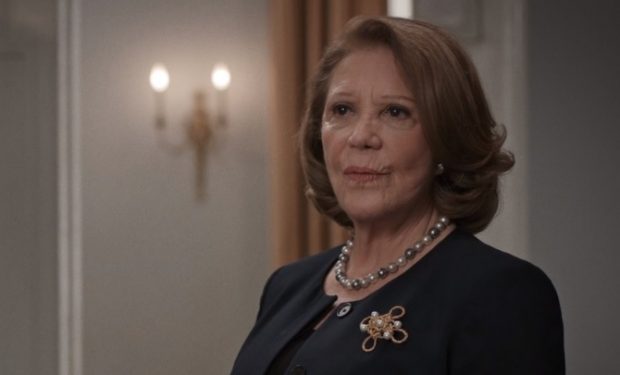 In the Season 5 premiere of Madam Secretary, “E Pluribus Unum” (translated “out of many, one”), after a deadly attack on the White House, Secretary of State Elizabeth McCord (Tea Leoni) tries to keep a major nuclear disarmament deal with India and Pakistan from falling apart. She turns to real life former secretaries Madeleine Albright, Hillary Clinton and General Colin Powell for advice, while a manhunt for the attackers brings D.C. to a halt. On a lighter note, Elizabeth’s daughter Stevie (Wallis Currie-Wood), who’s working for Russell Jackson (Zeljko Ivankek), is caught sneaking out of the office for a job interview with a congresswoman. She said she had a doctor’s appointment, but Russell’s former aide, veteran White House staffer June O’Callaghan, isn’t buying it. She warns Stevie, “If you’re going to allow yourself to be poached, hold out for your best offer.”

June O’Callaghan is portrayed by Linda Lavin. She’s known for her roles on 9JKL (Judy), The Good Wife (Joy Grubick), Sean Saves the World (Lorna), Alice (Alice Hyatt), and Barney Miller (Det. Janice Wentworth), among others. Lavin is also recognized for her roles in the films The Intern (Patty), Wanderlust (Shari), and on stage — she won a Tony Award in 1987 for the lead role in “Broadway Bound.” Madam Secretary airs Sundays at 10pm on CBS, right after NCIS: Los Angeles.