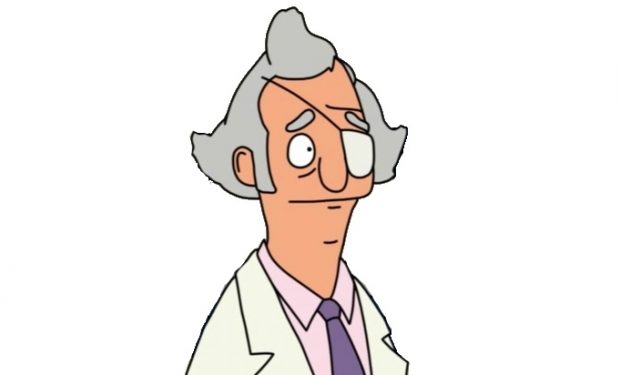 In the Bob’s Burgers episode “The Taking of Funtime One Two Three,” Louise, Tina and Gene are desperate to win the grand prize – a dune buggy – at the arcade. With the help of Bob’s wealthy landlord, Mr. Calvin Fischoeder, they come up with a plan. In addition to Bob’s Burgers, Mr. Fischoeder also owns the Wonder Wharf amusement park, among other properties.

Mr. Fischoeder is voiced by Kevin Kline. The Juilliard graduate is known for his roles in the films Beauty and the Beast (Maurice), Ricki and the Flash (Pete), The Ice Storm (Ben), A Fish Called Wanda (Otto, for which he won an Oscar for Best Supporting Actor), In & Out (Howard), French Kiss (Luc), Dave (Dave Kovic), Chaplin (Douglas Fairbanks), I Love You To Death, Sophie’s Choice (Nathan), and The Big Chill (Harold), among many others. Fun facts: He’s married to actress Phoebe Cates (Fast Times at Ridgemont High) and he’s won 3 Tony Awards for his lead roles in The Pirates of Penzance, On the Twentieth Century, and Present Laughter (2017).

Bob’s Burgers airs Sundays at 8:30 pm on FOX, right after The Simpsons, and right before Family Guy.

Kevin Kline & Phoebe Cates: Then & Now Together for over 30 years. pic.twitter.com/GZX2PMKIjP