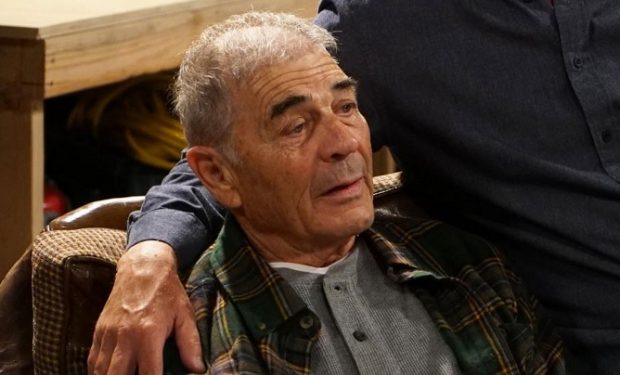 In the Last Man Standing episode “Man vs. Myth,” Vanessa (Nancy Travis) is worried that Mike (Tim Allen) hasn’t allowed himself to grieve the death of his father Bud. And now their son Chris (Kyle Anderson) wants to know more about Bud. “What’s there to say about him, he was a lousy father who dropped dead in a bowling alley,” says Mike. For this episode, the ghost of Bud appears so Mike can finally have the heart-to-heart talk he never had while his father was alive. Last time viewers saw Bud was in the 2015 episode “Mandy’s Party.”

Mike’s father Bud is portrayed by Robert Forster. He’s best known for his roles on Twin Peaks (Sheriff Frank Truman), and in the films The Descendants (Scott Thorson), Mulholland Drive (Detective McKnight), Me, Myself & Irene (Colonel Partington), and Jackie Brown (Max Cherry, see link above), for which he was nominated for an Oscar for Best Actor in a Supporting Role. Last Man Standing airs Fridays at 8pm on FOX, right before The Cool Kids. [Related: ‘Last Man Standing’ Actress Starring In ‘An Unbelievable Story of Rape’]