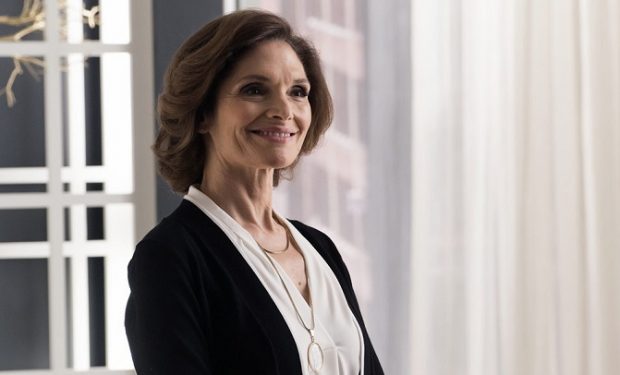 In the Season 4 premiere of Blindspot, “Hella Duplicitous,” Jane Doe/Remi (Jaimie Alexander) is told the ZIP poison that she was injected with in Season 3 hasn’t fully left her system. What remains in her body seems to be slowly traveling to her brain. It’s not good, and it’s going to get worse. Meanwhile, the FBI team hunts a dangerous enemy operative, and a deadly new foe emerges. This is where the new character Madeline Burke comes to play.

Madeline Burke is portrayed by Mary Elizabeth Mastrantonio. The Oscar-nominated actress is known for her roles on Grimm (Kelly Burkhardt), Limitless (Nasreen Pouran), Hostages (Mary Kincaid), Law & Order: Criminal Intent (Zoe Callas), and in the films The Perfect Storm (Linda Greenlaw), Robin Hood with Kevin Costner (Marian), The Abyss (Lindsey), The Color of Money (Tom Cruise’s girlfriend Carmen, the role for which she was nominated for an Oscar), and Scarface (Al Pacino’s kid sister Gina Montana), among others. Blindspot airs Fridays at 8pm on NBC, right before Dateline.

Fun fact: Mastrantonio married the director of The January Man, Irishman Pat O’Connor, one year after the film which she starred in with Kevin Kline was released.