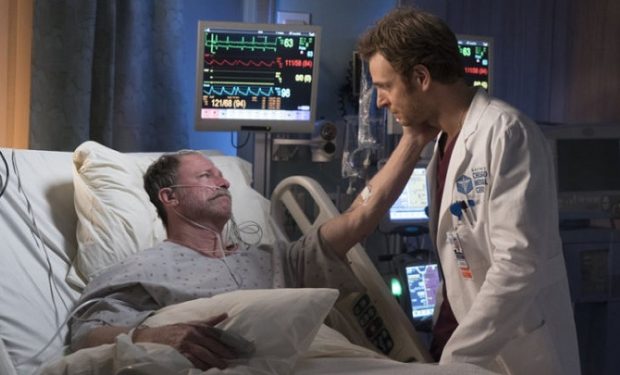 In the Chicago Fire-Chicago Med-Chicago P.D. three-part crossover event (Wednesday, October 3), Firehouse 51 faces an out-of-control blaze in a 15-story apartment building. The residents on the top floors are trapped. That includes the father of Chicago P.D.’s Jay Halstead (Jesse Lee Soffer) and Chicago Med’s Will Halstead (Nick Gehlfuss). Neither son can claim to have a great relationship with the “gruff old man,” Pat Halstead, but all of that is put aside to save his life. Last time Pat appeared on the Chicago franchise was in the April 2017 episode “Generation Gap,” when Pat first ignored Will’s medical advice about undergoing heart surgery but then agreed to the surgery which was successful.

[Check out Herthum in the amazing Westworld]

Pat Halstead is portrayed by Louis Herthum. He’s known for his roles on Westworld (Peter Abernathy), Longmire (Omar), True Blood (JD), and Murder, She Wrote (Deputy Andy Broom), among others. Herthum will appear next in the bio crime movie City of Lies with Johnny Depp and Forest Whitaker, who play the LAPD detectives who worked together on the murder cases of rappers Notorious B.I.G. (Biggie Smalls) and Tupac Shakur. Herthum plays City Attorney Stone who defends Depp’s character. The Chicago crossover event begins at 8pm on NBC.