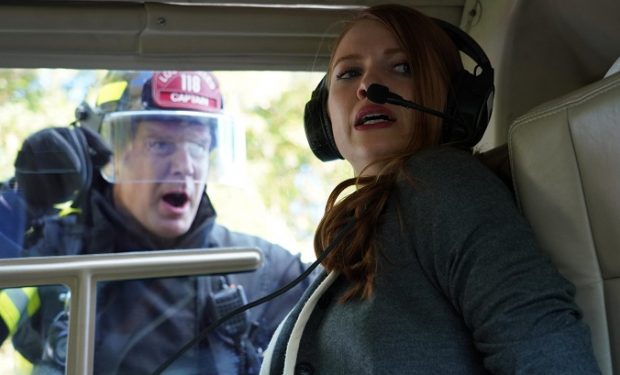 In the 9-1-1 episode “Dosed,” while Bobby (Peter Krause) tries to deal with his daughter’s death, and Athena (Angela Bassett) prepares for her daughter’s homecoming dance, the first responders race to the rescue of a crashed news helicopter. When they reach the aircraft, they’re surprised to see the reporter, Taylor Kelly, is still reporting on-air. The enterprising reporter is portrayed by Megan West.

Actress Megan West is known for her roles on This Is Us (Miguel’s sexy tempting assistant Heather), Public Morals (Rosemary Patton, photo below), and How to Get Away with Murder (Lila Stangard), among others. You can see West next in the horror film Apparition with Mena Suvari and Kevin Pollak, and in the TV series Queen America with Catherine Zeta-Jones who plays a renowned and ruthless pageant coach in Oklahoma. 9-1-1 airs Mondays at 9 pm on FOX, right after the medical drama The Resident.

Almost a year later, tonight the premier of Public Morals on TNT is here! My character won’t appear in the first episode but I’m sprinkled through out the series. #PublicMorals #tnt #RosemaryPatton #edburns #60s #sass