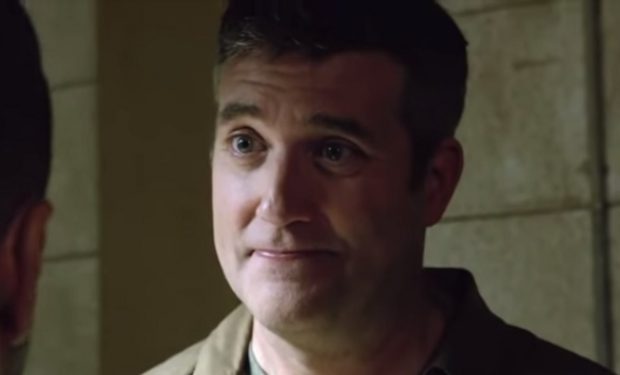 In the Blue Bloods episode “Meet the New Boss,”while Jamie Reagan (Will Estes) gets himself transferred to a new precinct, Danny Reagan (Donnie Wahlberg) gets a call from his old boss Gormley (Robert Clohessy). Gormley asks Danny and Baez (Marisa Ramirez) to follow retired NYPD detective, Ray Cross. Cross was a solid cop until he got caught stealing money during a narcotics investigation. The Police Commissioner, Frank Reagan (Tom Selleck), let him retire which he didn’t have to do. Now, months later, Frank is getting threatening emails and the content points to Cross who has been stalking Frank. Gormley hopes that when Cross sees Danny and Baez watching him, “Hopefully then he’ll back the hell off.”

[Bierko put on some weight for Cinderella Man]

Ray Cross is portrayed by Craig Bierko. The 6’3″ tall actor is known for his roles on UnREAL (producer Chet Wilton), Boston Legal (Jeffrey Coho), and in the films Scary Movie 4 (Tom, watch hilarious clip below), Cinderella Man (Max Baer, see link above), and Fear and Loathing in Las Vegas (Lacerda), among others. Fun fact: Bierko was nominated for a Tony Award in 2000 for his role as Professor Harold Hill in The Music Man. Blue Bloods airs Fridays at 10pm on CBS, right after Hawaii Five-0.