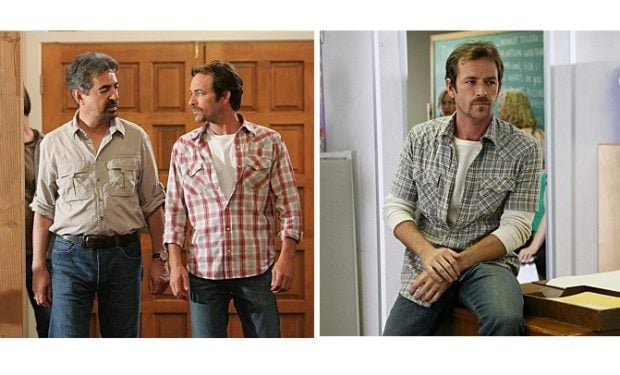 On the Season 14 premiere of Criminal Minds, which is the series’ 300th episode, Reid (Matthew Gray Gubler) and Garcia (Kirsten Vangsness) are abducted by mass murderer Benjamin Merva (Michael Hogan, The Man In the High Castle). Garcia bravely tells Merva, “I will die before I help you,” but she’s scared shitless. Sure, the BAU is looking for them, and considers Reid and Garcia like family, but where the hell are they? Even Garcia is scared. He tells Garcia to send a message to his mother, just in case he doesn’t make it.

During their frantic search, the BAU finds clues from their past that help them solve the mystery as to why Reid and Garcia have been targeted, and it involves cult leader Benjamin Cyrus. Last time we saw Cyrus was in the 2008 episode “Minimal Loss.” Reid and Prentiss (Paget Brewster) went undercover into Cyrus’ cult to investigate child abuse and got trapped inside the Waco-like compound. Benjamin Cyrus is (again) portrayed by Luke Perry. Perry is known for his roles as Fred on Riverdale, Reverend Jeremiah on Oz, Dylan on Beverly Hills, 90210 and Pike on Buffy the Vampire Slayer, among others. Criminal Minds airs Wednesdays at 10pm on CBS, right after SWAT Team. [Related: Who Is Reid’s Mother Diana on ‘Criminal Minds’?]