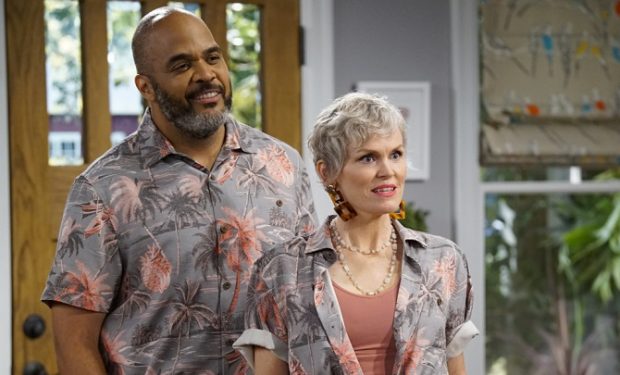 In the new CBS sitcom Happy Together, married couple Jake (Damon Wayans, Jr.) and his wife Claire (Amber Stevens West) are caught off guard when Jake’s client, pop star Cooper James (Felix Mallard) shows up at their home. He needs a place to hide from the paparazzi after his break-up. While staying at Jake and Claire’s, Cooper James meets Claire’s parents, Bonnie (Stephnie Weir) and Gerald.

[Watch Williams in The Sinner with Jessica Biel]

Claire’s father Gerald is portrayed by Victor Williams. He’s known for his roles on The Sinner (D.A. Hutchinson), The Affair (Detective Jeffries), Sneaky Pete (Richard), The King of Queens (Doug’s best friend Deacon), and ER (Roger McGrath), among others. Williams is also recognized for his roles in the films Cop Land (Russell) and The Preacher’s Wife (Robbie). Happy Together airs Mondays at 8:30pm on CBS, right after The Neighborhood and right before Magnum P.I.

[NOTE: Watch Happy Together or any CBS show through Amazon Prime or CBS ALL-ACCESS. Both options offer free trials.]

Happy Birthday to Victor Williams! Share your favorite Deacon moments in the comments below! pic.twitter.com/53Xh8sNf6E