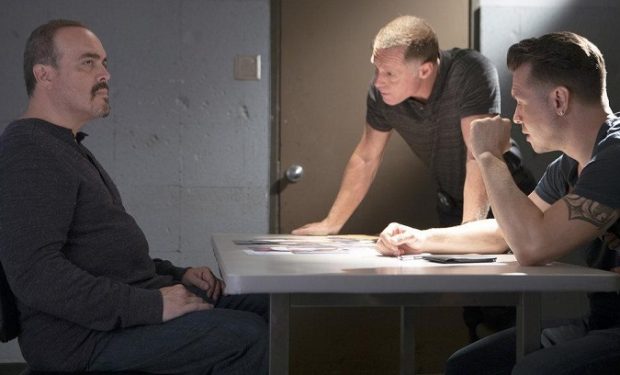 At the heart of the Chicago Fire-Chicago Med-Chicago P.D. crossover event on October 3 are the Halstead brothers. Firehouse 51 faces an out-of-control blaze in a 15-story apartment building where Jay (Jesse Lee Soffer) and Will’s (Nick Gehlfuss) father Pat (guest star Louis Herthum) lives. When Intelligence finds out that the fire was intentional, they race to find the man responsible. In one scene, Voight (Jason Beghe) and Dawson (Jon Seda) bring in a man named Carlos for questioning.

[Check out David Zayas as Sgt. Batista in Dexter]

Carlos is portrayed by David Zayas. The former NYPD cop is known for his roles on Blue Bloods (Governor Martin Mendez), The Blacklist (Manny Soto), Gotham (mob boss Sal Maroni), Dexter (Sgt. Angel Batista), Angels in America (Super), and Oz (Enrique Morales), among others. Zayas is also recognized for his roles in a variety of films including Annie with Will Smith (Lou), The Expendables with Sylvester Stallone (General Garza), and Michael Clayton with George Clooney (Detective Dalberto). The Chicago crossover event begins at 8pm on NBC.