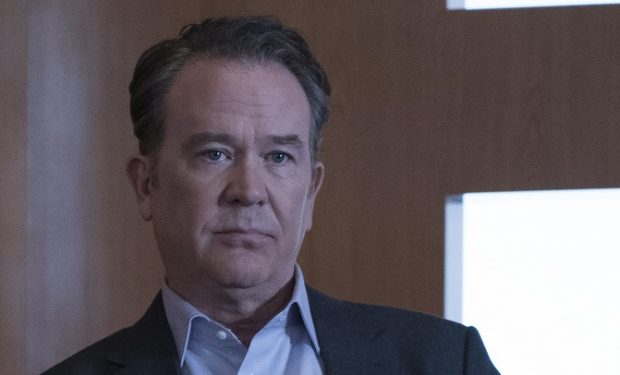 In the How to Get Away with Murder episode “The Baby Was Never Dead,” while the governor is intent on putting Annalise’s (Viola Davis) legal clinic in jeopardy, she also has to defend a wealthy CEO accused of killing his business partner. With her in court is her new boss, Emmett Crawford, managing partner of Caplan & Gold. Emmett was the only partner in the firm who believed hiring Annalise was a smart idea.

[If you haven’t seen Ordinary People, you should]

Emmett Crawford is portrayed by Timothy Hutton. Like Davis, Hutton is an Oscar winner. (Davis won her Oscar for Fences; Hutton for Ordinary People — see link above.) Hutton is also known for his roles on Tom Clancy’s Jack Ryan (Nathan Singer), American Crime (Russ, for which he was nominated for an Emmy Award), Leverage (Nathan Ford), A Nero Wolfe Mystery (Archie Goodwin), and in the films Beautiful Girls (Willie), The Falcon and the Snowman (Christopher Boyce), and Taps (Brian Moreland, see photo with Sean Penn and Tom Cruise below), among many others. How to Get Away with Murder airs Thursdays at 10pm on ABC, right after the Grey’s Anatomy Station 19 crossover.

Timothy Hutton, Sean Penn, and Tom Cruise on the set of Taps, 1981 pic.twitter.com/qUrNREooFU