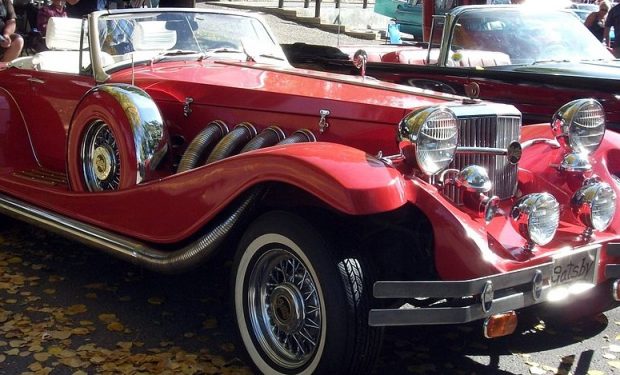 A livery choice for The Great Gatsby in Dublin? (photo by dave_7 via Wikimedia Commons)

Winter in Dublin would hardly make anyone think of raucous 1920s summer parties on Long Island, as there aren’t any gin-soaked flappers dancing the Charleston to be found anywhere in the dark, damp and dreary streets. However, Mr. Gatsby entreats you to forget the weather and join him at the Gate Theatre for a fabulous evening of music, dancing and drama. Alexander Wright’s acclaimed production of The Great Gatsby is returning to Dublin following huge demand after its sold-out run in Summer 2017.

[For those who can’t get to Dublin…there’s celluloid]

The curtain has just come down on another theatrical triumph, the Ruth Negga-starring Hamlet, and staff at the Gate are now pulling up seats and lowering the chandeliers, transforming the historic theatre into an interactive narrative space. Audiences will mingle with the cast, following actors backstage to learn more about the millionaire with the mysterious past. The production offers a unique portal into F. Scott Fitzgerald’s novel. While the cast are attired in exquisite 1920s costumes, audiences are also encouraged to dress in 1920s style – and bring their dancing shoes. The Great Gatsby runs from November 14 until January 20.