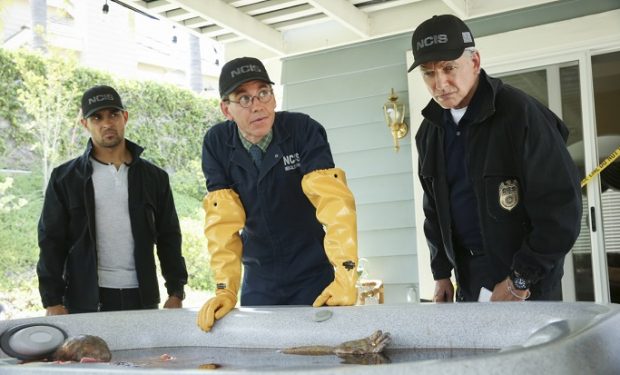 On the NCIS episode “Love Thy Neighbor,” the team gets several calls from several different neighbors who live on the same cul-de-sac. Their neighbor, Davis Moon, a Navy lieutenant is found murdered in his hot tub. When the NCIS team shows up, each eclectic neighbor comes out and tells their story. There’s an older divorcee who says she tried to be friendly to the dead man, and another who (in his underwear) complains about recent burglaries in the neighborhood.

[Binge watch NCIS whenever you want]

When the agents gathered around the hot tub, Dr. Jimmy Palmer (Brian Dietzen) warns them that the body has been submerged in water and that the Jacuzzi and heater timer went off every night which will accelerate the decomposition of the body.” Standing near, McGee (Sean Murray) says he might throw up, and Gibbs (Mark Harmon) orders that they send the entire, full hot tub to the M.E office for a full autopsy. There, forensic scientist Kasie Hines (Diona Reasonover) says with excitement: “The most disgusting find in NCIS history? A girl’s got to see it!” NCIS airs Tuesdays at 8pm on CBS, right before the new crime drama FBI.