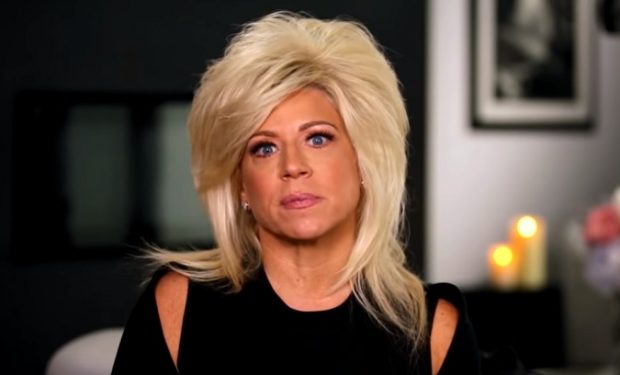 Theresa Caputo aka the Long Island Medium is back for lucky Season 13 of her TLC show, Long Island Medium. The title of the premiere episode “A Year of Separation” refers to her separation from her husband of 28 years, Larry Caputo. During Season 13, Theresa meets Larry after not seeing him for about nine months. While separated, Theresa had surgery on her ACL (anterior cruciate ligament). “It was weird waking up and Larry not being there,” Theresa admits. (They announced their separation in December 2017, and filed for divorce in June 2018.)

[Theresa wears a Blessed necklace like this one on the show]

One day before the Long Island Medium season premiere airs (and four months after filing for divorce), Caputo posted a photo of her wearing her signature blond coif and a black blouse trimmed with boa-like feathers. The caption reads: “Feeling feathery.” Long Island Medium airs Mondays at 8pm on TLC.