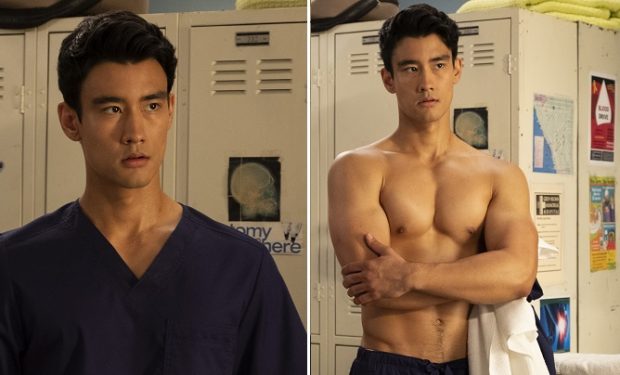 In the Grey’s Anatomy episode “Gut Feeling,” a seemingly drunk patient (Mark L. Taylor) pushes Richard’s (James Pickens, Jr.) buttons and gives him a medical mystery to solve. But before Richard operates, he gets kicked out of the OR by the new chief Alex Karev (Justin Chambers). Meanwhile, in the locker room, the new, gorgeous, openly gay attending orthopedic surgeon Dr. Nico Kim takes off his shirt in front of Dr. Levi Schmidt (Jake Borelli) who appears in awe of Dr. Kim’s physique.

[Check out Landi as a juror on Bull]

Dr. Nico Kim is portrayed by Alex Landi. He just made his TV debut on a 2017 episode of Bull (as a juror) – so the role of Dr. Kim is his big break. According to his bio, Landi, who is half Korean, half Italian, was born in New York City. He had aspirations of becoming a professional tennis player but pivoted to pursue acting. He trained at Lee Strasberg Theatre and Film Institute in New York and trained with a renowned martial arts team in Asia. No word yet on whether we’ll see Landi’s martial arts skills at Grey Sloan Memorial Hospital. Grey’s Anatomy airs Thursdays at 8pm on NBC, right before Station 19.