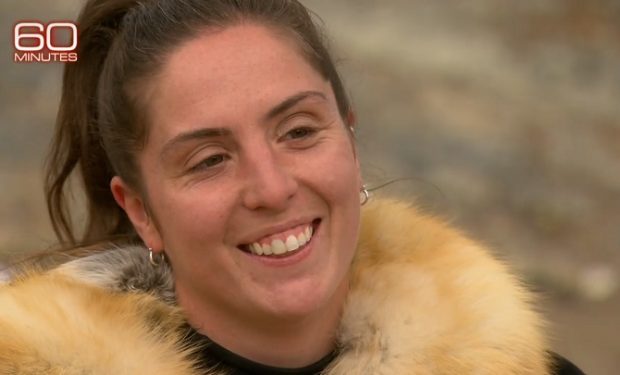 On the October 21 episode of 60 Minutes, Scott Paley travels to Mongolia to meet American falconer and anthropologist Lauren McGough. At the age of 14, when she became a licensed falconer. Since then McGough has dedicated her life to the “art and practice of hunting in partnership with eagles.” While on a Fulbright Scholarship to Mongolia in 2009, McGough learned how to hunt with eagles while living with the nomadic Kazakh berkutchi of Mongolia. She earned a PhD in Social Anthropology (studying the Kazakh eagle culture) from the University of St. Andrews in Scotland.

[GoPro Hero5 on sale at Amazon]

McGough now uses the knowledge she gained in Mongolia to rehabilitate injured eagles in the United States and South Africa. Check out the mini-documentary McGough assisted GroPro in producing, “Eagle Hunters in a New World” (see below). She led a GoPro team out on the steppes where they strapped camera mounts to the backs of the golden eagles, to capture the eagle’s point of view during a hunt.

On a more personal note, McGough recently paid homage to the eagle and its prey by getting tattoos of them on her body. In April, she got a tattoo of a jackrabbit running down her leg. It appears to be running away from the giant swooping eagle tattooed on her back. See photos of the amazing artwork, below. 60 Minutes airs Sundays at 7:30 pm on CBS.

@curtisburgess gave me this wonderful jackrabbit last month! My golden eagle tattoo didn’t seem right without something for her to be stooping towards, so Curtis made this incredible jackrabbit hauling it down my thigh. I admire hares so much that I loved this way of paying homage to these amazing creatures. Thank you Curtis – I’m so stoked at the full scene of predator and prey! #tattoo #hare #haretattoo #jackrabbit #goldeneagle #eagletattoo