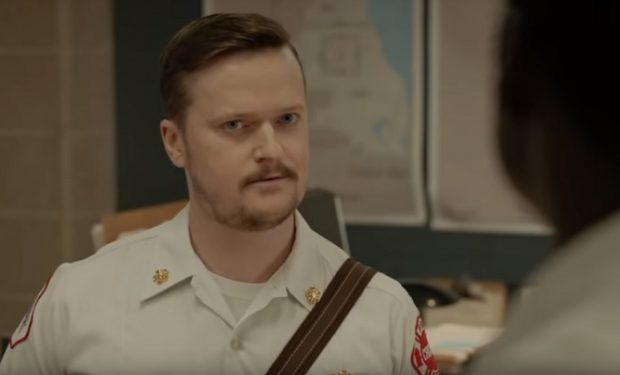 There are a number of new faces on Season 7 of Chicago Fire. In the absence of Gabby Dawson (Monica Raymund), paramedic Emily Foster (Annie Ilonzeh) takes her place. Foster doesn’t make a great first impression, especially with Chief Boden (Eammon Walker) which is too bad. Boden also has to deal with the new assistant deputy commissioner, Jerry Gorsch, who walks into the firehouse like he owns it. Boden knows Gorsch. When Boden congratulates Gorsch on his recent promotion, Gorsch calls it a “meteoric rise” and adds, “I’m just glad Commissioner Grissom recognized my potential.” Gorsch tells Boden, “I hope this won’t be too awkward for you.” Boden says it won’t — but as he walks away he mutters to himself, “Of all the people.” Gorsch is going to be a character that whips up a lot of animosity.

Jerry Gorsch is portrayed by Steven Boyer. The former stand-up comedian is known for his roles on Trial & Error (Dwayne Reed), The Blacklist (Stephen Altman), Orange Is the New Black (Shady Jay the Super), and in the films Bridge of Spies (Marty) and Did You Hear About the Morgans? (US Marshal Ferber), among others. Chicago Fire airs Wednesdays at 9pm on NBC, right after Chicago Med, and right before Chicago P.D.

Doing a #TrialAndError binge and @SteveBoyer5000 is slaying me, Dwayne Reed is the goofiest redneck on TV! 🤣 pic.twitter.com/ZEcXj1NxUV