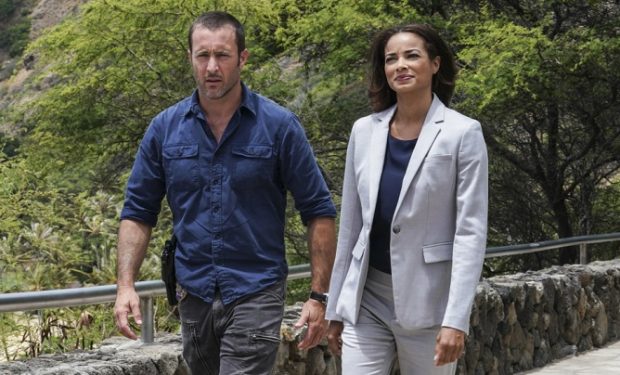 In the Season 9 premiere of Hawaii Five-0, “Ka ‘owili’oka’i (Cocoon),” when Steve McGarrett’s (Alex O’Loughlin) CIA agent friend Hennessey is killed, he desperately tries to find his murderer. During the investigation, McGarrett asks CIA Agent Greer for help. He thanks her for agreeing to meet because “after Morocco, I wasn’t sure if you’d want to see me again.” Greer smiles, “Don’t flatter yourself, Steve.” It’s revealed that McGarrett and Greer spent two days together on R&R in a hotel in Morocco. “I didn’t expect you to propose,” she adds. (Steve got deployed: that’s why he left suddenly. He left a note, “and I meant every word of it.”) But back to business! When McGarrett presses Greer about possible suspects, she tells him her theory, that is was an inside job done.

#aboutlastnight w/ @cj121075 for @projectangelfood award’s show. Such a wonderful night! Thank you @chazdean for asking me to present you with this award! And thanks to @makeupbypaulajane!! 😘