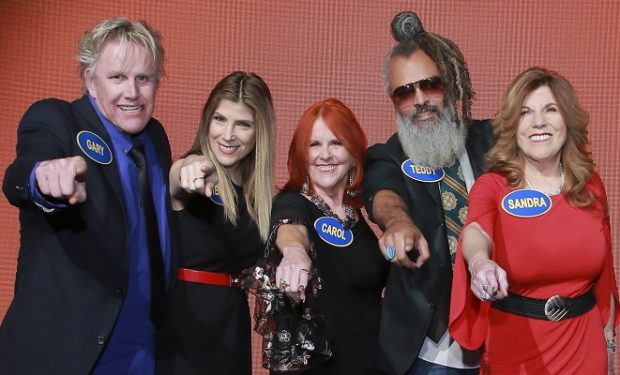 Gary Busey is known as an actor. The 74-year-old was nominated for an Oscar for his starring role in the 1978 film The Buddy Holly Story. But he launched his career in show biz as a musician. He was a drummer in The Rubber Band who went by the name(s) Teddy Jack Eddy. Busey, as Teddy Jack Eddy, appears on several Leon Russell recordings. Russell was a prolific songwriter who was inducted in the Rock and Roll Hall of Fame and the Songwriters Hall of Fame. The late great celebrated musician performed and toured with everyone from Joe Cocker and George Harrison to Elton John and Willie Nelson. His songs have been covered by many including “Delta Lady” (Joe Cocker), “Superstar” (The Carpenters), “A Song For You” (Amy Winehouse), and “Shine a Light” (Rolling Stones), among others. Russell died in 2016 at the age of 74. We bring up Busey’s music career because he’s competing on Celebrity Family Feud and is bringing his godson Teddy Jack with him. Yes, Gary Busey’s godson bears the famous actor’s old musical stage name.

Teddy Jack is a singer and songwriter too, now living in Austin, Texas. His mother is singer Mary McCreary. She was in the singing trio Little Sister which often sang backup vocals for Sly and the Family Stone. After marrying Leon Russell in 1975, the couple recorded two albums — Wedding Album (1976) and Make Love to the Music (1977). They divorced in 1980. Teddy Jack is Russell’s only son among his six children from three marriages. Father and son released Face in the Crowd when Teddy Jack was 21. In 1999, Leon Russell said he wasn’t allowed to see his son Teddy Jack for 10 years after the divorce. But when Teddy Jack turned 18, he called his father for a reunion. Celebrity Family Feud airs Sundays at 8pm on ABC. [Related: Who Is Gary Busey’s 30-Years-Younger Wife Steffanie on Celeb Family Feud?]

Check out Busey in his Teddy Jack Eddy t-shirt!

TEDDY JACK EDDY (aka @THEGaryBusey) is going to be on with @KennedyNation!

Time to get out the BUDDY HOLLY STORY and crank it up!!
The best music biopic!