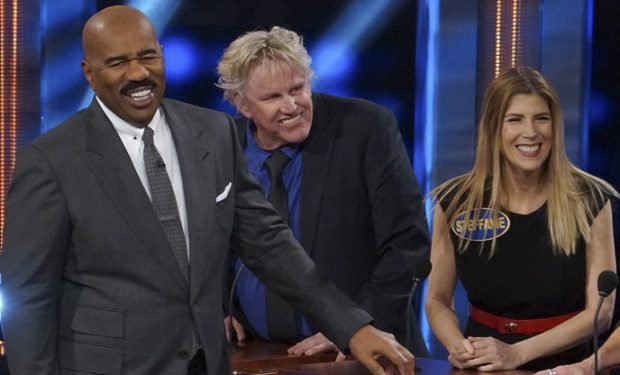 Two former Dancing with the Stars competitors face each other on Celebrity Family Feud. Actress/country singer Jana Kramer and her family play against Oscar-nominated actor Gary Busey (The Buddy Holly Story) and his family. Kramer brings her husband Michael John Caussin, and Busey brings his wife, Steffanie Sampson, among others. Both celebrities play for charities close to their hearts. Kramer plays for Safe Horizon, an organization that provides social services for victims of abuse and violent crime (Kramer is a survivor), and Busey plays for his foundation for Children’s Kawasaki Disease Research. Gary and Steffanie’s son Luke suffered from the disease when he was 14 months old. (Luke recovered — he’s now 8!)

[Gary and Steffanie both had roles in Sharknado 4]