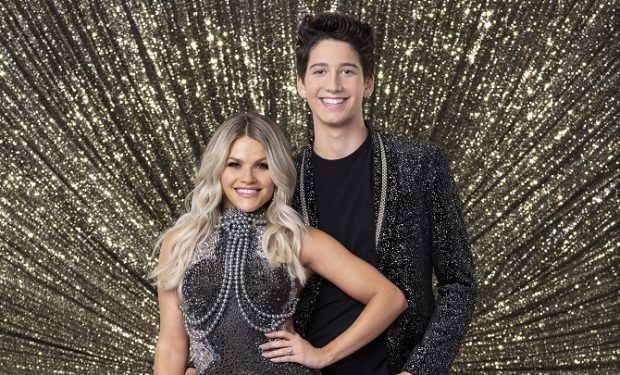 There are 13 new celebrities competing on Season 27 of Dancing with the Stars. Among the 13 are a handful of actors including John Schneider (Bo Duke on Dukes of Hazzard), Nancy McKeon (Jo Polniaczek on Facts of Life), and Milo Manheim. Milo, the 6’2″ tall, 17-year-old actor known for his role as Zed in the 2018 Disney Channel TV movie Zombies (see link below), is paired with petite pro dancer Witney Carson. (Witney is a former DWTS champ with another well-known actor, Alfonso Ribeiro – The Fresh Prince of Bel-Air.)

[That’s Milo with the green hair in ZOMBIES]

[Check out Milo on Ghost Whisperer with his mom]

Milo Manheim is the son of actress Camryn Manheim, who is best known for her roles on The Practice (attorney Eleanor Frutt, for which she won an Emmy Award) and Ghost Whisperer (Delia Banks). In 2009, at the age of 8, Milo appeared on an episode of Ghost Whisperer with his mother (see link above). Camryn Manheim is currently in the TV sitcom Living Biblically. Dancing with the Stars airs Mondays at 8pm on ABC.

Another cute mother and son photo…

Thanks for all the piggy back rides. Happy mother’s day💕