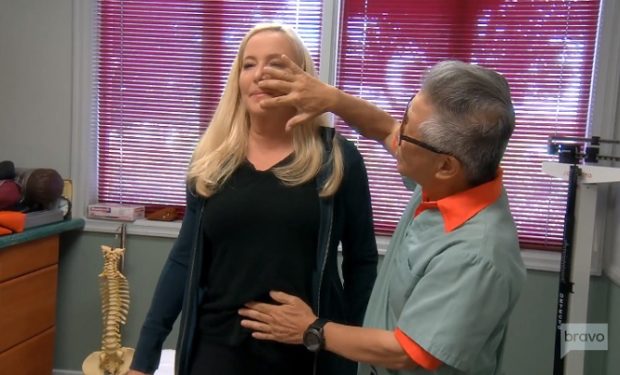 On The Real Housewives of Orange County episode “A Peace Treaty, A Blind Date, and a Divorce No One Understands,” the drama continues at Tamra Judge’s birthday party for husband Eddie. It ends in shambles after Kelly Dodd calls new wife Emily Simpson’s husband “a little bitch” — in front of everyone, including Emily and her husband. Kelly continues to “play dirty” by spreading rumors about Vicki’s boyfriend Steve. (Kelly says he’s after Vicki’s money; Vicki says “he has money” and people “always want what I have!”)

Luckily, Shannon Beador provides some comic relief when she visits her “energy healer” Dr. Moon; he is listed as an energy medicine specialist. Shannon says she’s been seeing Dr. Moon since she had her daughters. When Shannon heard Vicki complaining about her swollen ankle, she told Vicki to join her at her next appointment. Dr. Moon told Vicki he could hang her upside down “and then everything goes away.” He also told Shannon with a laugh, “so your problem is you talk too much, eat too much,” and diagnosed her with “a mouth problem.” Vicki gets a laugh out of that one. The Real Housewives of Orange County airs Mondays at 9pm on Bravo. [Related: Where Is Shannon Beador’s Food Company, $12 Seafood Meals Delivered]