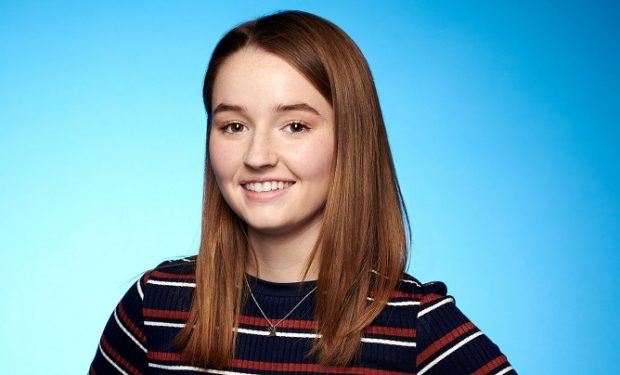 In the Season 7 premiere of Last Man Standing (after a year hiatus), Denver married couple Mike (Tim Allen) and Vanessa Baxter (Nancy Travis) eagerly await Eve’s (Kaitlyn Dever) visit home from the Air Force Academy. Eve is the youngest of their three daughters and most like her father. She enjoys camping, sports and guns, and shares Mike’s conservative views. In Season 6, Eve didn’t get into West Point as she hoped so she took a personal year off. During that time, she decided to apply to the Air Force Academy and was accepted.

[A False Report: A True Story of Rape In America was released in February 2018]

The 21-year-old actress who portrays Eve, Kaitlyn Dever, is currently filming Netflix’s new drama Unbelievable which based on the book, “A False Report: A True Story of Rape In America,” by Pulitzer Prize-winning journalists T. Christian Miller and Ken Armstrong. (The original article, “An Unbelievable Story of Rape,” was first published in 2015 via ProPublica and The Marshall Project.) Dever plays the protagonist, Marie, an 18-year-old girl who was charged with lying about having been raped. She said she was attacked at knife-point and then said she made it up. With the help of two female detectives (portrayed by Oscar-nominated Toni Collette, and Merritt Wever, Nurse Jackie) the truth is delivered in the end. Last Man Standing airs Fridays at 8pm on FOX. Unbelievable will premiere in 2019.

It’s your voice. It’s your vote. Use it. Get out and vote !! #rockthevote #timetovote //go click the link @levis bio for more information. 🇺🇸