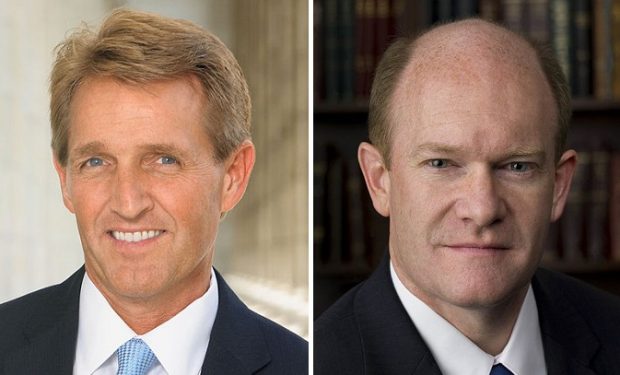 Hours after Dr. Christine Blasey Ford testified before the Senate Judiciary Committee regarding Brett Kavanaugh’s nomination to serve on the U.S. Supreme Court, Senator Jeff Flake released a statement that said he would vote “yes” to advance Kavanaugh’s nomination to the full Senate floor. But the Republican from Arizona then asked to delay the confirmation vote and to open an FBI background investigation into the sexual assault accusations against Kavanaugh. Senator Chris Coons (D-Delaware) agreed that an investigation was necessary. According to The New York Times, Flake and Coons “squeezed into an oversize phone booth” to call FBI Director Christopher Wray. When Wray couldn’t be reached, they contacted deputy attorney general Rod J. Rosenstein.

[Me Too Shirts is selling I Believe Christine tees]

Hours later, President Trump announced that he ordered the FBI to conduct a supplemental investigation to update Judge Kavanaugh’s file and that the update “must be limited in scope and completed in less than one week.” On Sunday, September 30, 60 Minutes will air Scott Pelley’s interview with Senators Flake and Coons.