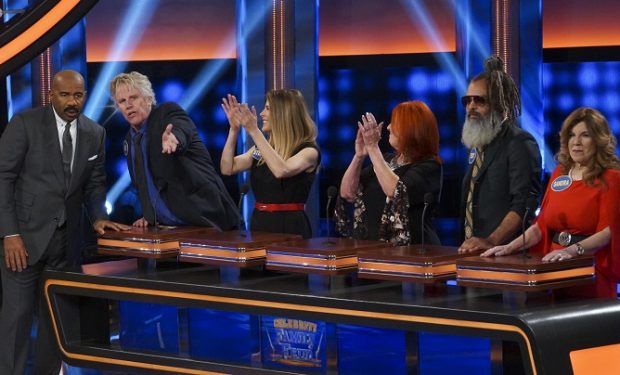 Musically gifted actor Gary Busey is best known for his starring role in the 1978 film The Buddy Holly Story. He played all the music and was nominated for an Oscar for his performance. Some might say Busey walks to the beat of his own drum, and well, that’s true. Busey launched his career as a drummer. He went by the alias of Teddy Jack Eddy, and often played with the late great musician Leon Russell. Now Busey is making new music with Russell’s son (Busey’s godson) who is named after Busey, Teddy Jack. Busey brings Teddy Jack on Celebrity Family Feud on September 23.

Busey and Teddy Jack started a PledgeMusic campaign to raise money for two new recordings including an original single titled “All the Way.” They want to coordinate the release of the two songs with the 40th anniversary of the The Buddy Holly Story. Busey’s godson Teddy Jack is arranging, engineering and playing on Busey’s new recordings. The PledgeMusic campaign ends November 7. If you pledge $250, you can get a personalized voicemail greeting by Busey for your incoming calls. Celebrity Family Feud airs Sundays at 8pm on ABC.