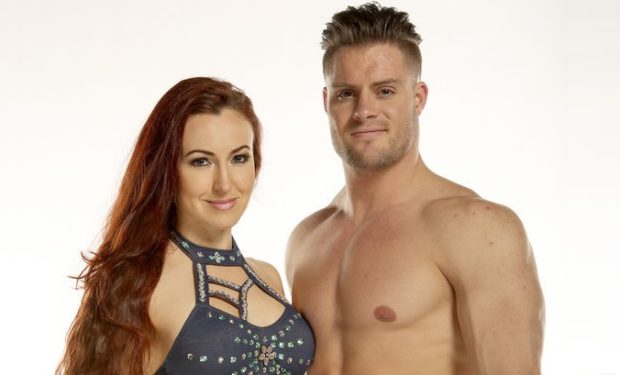 The married trapeze duo Duo Transcend is one of the 22 acts who’ve made it to the semifinals on Season 13 of America’s Got Talent. Husband Tyce Nielsen has revealed on AGT that he’s legally blind in his right eye which makes watching their performances all the more terrifying. During the Judge Cuts, Tyce wore a blindfold and his wife/partner Mary Ellen Wolfe slipped from his hold and fell (luckily, Mary Ellen wasn’t injured). For their live semifinals performance, Duo Transcend says “we’re doing something we’ve never done before.” See video clip below.

On social media, Duo Transcend always count their blessings and thank their families for their support. Mary Ellen is the daughter of Kim Wolfe, former mayor of Huntington, West Virginia and former Cabell County Sheriff. In 2006, the Republican ran for the state’s 3rd congressional district (but lost). Kim Wolfe served two tours of duty in the U.S. Navy in Vietnam. He and his wife, Debbie Wolfe, have eight children including Mary Ellen, and are members of The Church of Jesus Christ of Latter-day Saints. America’s Got Talent airs Tuesdays at 8pm on NBC. Results of Tuesday shows air Wednesdays at 8pm.

Rehearsal time! Our next @agt live show is this Tuesday! We are doing something we’ve never done before. We appreciate everyone’s support so much! Please download the America’s got talent app so that you can vote for us and save us if we aren’t in the top 3 during the results show on Wednesday. Love to everyone! #agt #agt13 #acrobatics #gymnastics #gym #train #training #dancer #aerial #aerialist #family #love #husbandandwife #tyceandmary #maryandtyce #circus #cirque