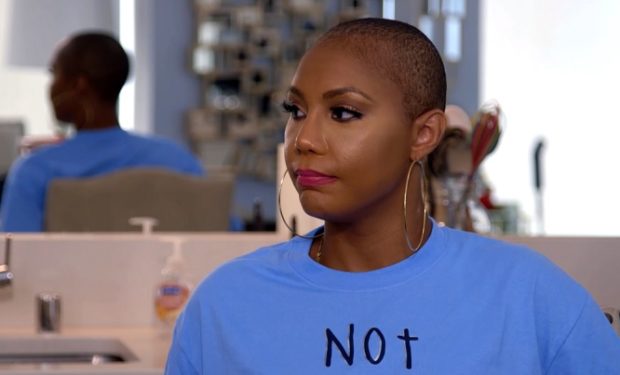 On the Braxton Family Values Season 6 episode “Wellness Hell,” Traci Braxton goes on an “outrageous” wellness retreat with her fellow celebrity friends Phaedra Parks, Luenell and Natalie Nunn. They talk about the Braxton sisters not showing up for work (to film the show).

[pictured: Tamar wears a Not Today Satan t-shirt on the show]

Meanwhile, Towanda shows up at her sister Tamar’s house and tells her, “I haven’t talked to Traci since she said she was going to go on strike with us and then she showed up to work.” Tamar, who wears a “Not Today Satan” t-shirt and exposes her shaved head, says, “That was the icing on the cake.” Tamar adds, “I’m am just not here for the s—t show.” Tamar posted a video of her getting her head shaved in March (see below). Braxton Family Values airs Thursdays at 9pm on WEtv.