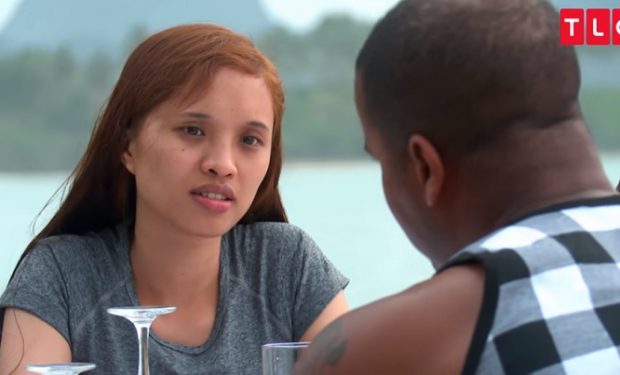 On the 90 Day Fiance: Before the 90 Days episode “The Things We Do for Love,” the cameras follow Paul and Karine as they rush to the hospital. There, they’re told that the baby (she’s about five weeks pregnant) has abnormalities. On a lighter note, Tariq is still trying to decide if he’s going to propose to Hazel before leaving the Philippines in a few days. When they sit down for a heart-to-heart, Tariq admits that “there’s been a lot going on” with him and his family, and Hazel and her family. But when he mentions his “crazy brother” and Hazel mentions her “crazy sister,” he’s totally caught off guard. Hazel explains that she’s in Japan and that she just got a message from her that day. It’s not good news.

Clearly the “crazy sister” hasn’t met Tariq but told Hazel that she doesn’t like him and she thinks Hazel should marry a Japanese guy. When Hazel tells Tariq that her sister is already married to a Japanese guy, he says, “This is almost comical, like a joke.” When he asks Hazel why she cares what her sister thinks, she says maybe that guy (who she’s supposed to marry in Japan) is very rich. Tariq just shakes his head in disbelief and says, “Wow.” 90 Day Fiance: Before the 90 Days airs Sundays at 8pm on TLC.