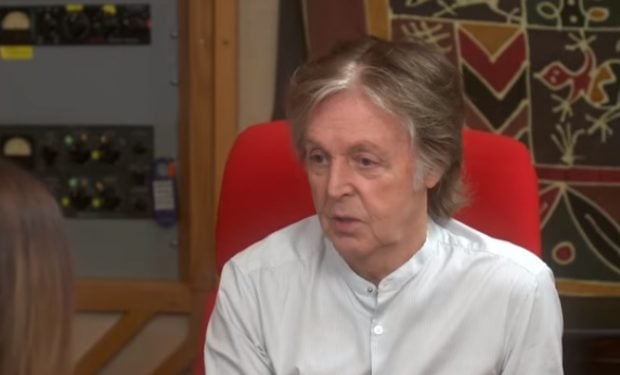 On 60 Minutes, correspondent Sharyn Alfonsi interviews the legendary former Beatle, Paul McCartney. In a music studio, Sir Paul plays his new single “Fuh You” for her. When he sings along to the line, “I just wanna know how you feel/ Want a love that’s so proud and real,” Alfonsi asks, “Can’t you just hear a crowd singing that back at you.” McCartney says politely, “Yeah, I fancy doing that one live.”

Alfonsi asking McCartney if he can imagine a crowd singing back to him — when crowds of screaming girls used to routinely cry and faint in his presence — brings to mind a Joe DiMaggio story. Once on his honeymoon with movie icon Marilyn Monroe, DiMaggio listened as his wife recalled what it was like to entertain the troops and perform at a USO show. Marilyn told the Yankees legend, “Oh, Joe, you’ve never heard such cheering.” DiMaggio coolly replied: “Yes, I have.”

It also might remind fans of the time McCartney was on Saturday Night Live in 1993 with the late, lovable Chris Farley. Farley played a TV host who spends his time on-air complimenting his guests and pointing out the obvious. The socially awkward and self-deprecating Farley (Alfonsi is neither) continues to ask McCartney questions like “Remember when you were with the Beatles? Or that time everyone thought you were dead?” McCartney nods and politely says yes. The best line from Farley? He reminds McCartney of the line that the “love you take is equal to the love you make.” The earnest Farley asks: “Is that true?” 60 Minutes airs Sunday, September 30 at 7:30pm on CBS.