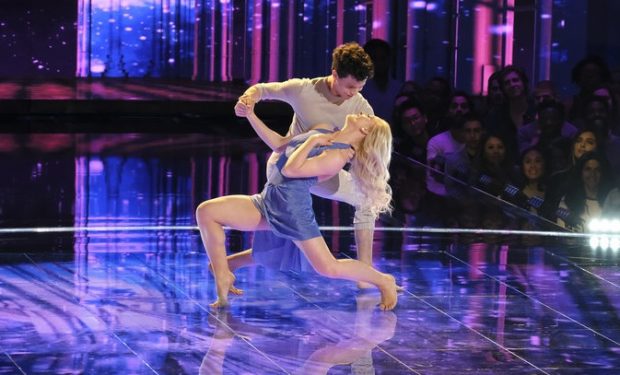 On the second round of Duels on World of Dance, judges Jennifer Lopez, Derek Hough and Ne-Yo are moved by two Junior performances. And it just so happens that they’re competing against each other. First up is 16-year-old heartbroken Vivian Ruiz from Miami, Florida. For her Duel performance, she lays it all out on the dance floor as she performs to the song “Came Here For Love” by Sigala and Ella Eyre (see song link below). Charity & Andres from Springville, Utah give a performance of a lifetime when they dance to the Kaleo song “Way Down We Go.” (See song link below.) The choreography is fierce and Charity & Andres nail it.

Charity & Andres haveimpeccable timing and their leaps are gorgeous — but there’s one leap in particular that has JLo shaking the arms of Ne-Yo and Derek Hough and screaming, “What the hell was that?!” Charity runs up behind Andres and somehow manages to land (in a split) on his shoulder. Watch the amazing move in the clip below, around the 2-minute mark. World of Dance has moved to its new day and time – Wednesdays at 8pm on NBC.

THIS DUEL WAS ALMOST TOO LIT. ??? See why our judges were left speechless during #WorldofDance TOMORROW 8/7c on @nbc. ?? pic.twitter.com/pmCyVucS9d