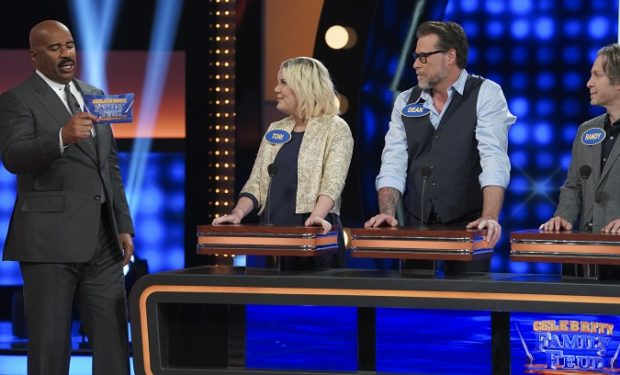 Randy Spelling is a life and business coach. He is the founder and Head Freedom Strategist at Randy Spelling Coaching which is based in Portland, Oregon. Randy says that after his father’s death in 2006 “and some near death experiences of my own, at age 27, I set out on a mission to ‘find’ myself and understand what it takes to reach real happiness, how to transform low self-esteem, minimize anxiety and overwhelm, and what leads to a truly fulfilled, connected life.” Randy Spelling Coaching offers private coaching, group programs, retreats, and VIP Days (intensive sessions held over two days). On a personal note, Randy is married with two children. Celebrity Family Feud airs Sundays at 8pm on ABC.

Remember this before/after photo?? I showed it to my kids and they didn’t even recognize me in the pic on the left! ? That was 10 years ago when I was feeling trapped, inauthentic, and frustrated that I wasn’t as happy and as FREE as I wanted to be. I felt caged. . I want to share with you what I did to go from that before picture to that after picture. JOIN ME LIVE on Wednesday the 25th at 5:15pm PST for a FREE training call where I’ll share 6 Freedom Secrets that will create big space and big change in your life NOW! (REGISTER USING THE LINK IN MY BIO ? ) . YOU WILL LEARN: ✅ Why you must CREATE your personal Roadmap to Freedom. ✅ Which limiting thoughts SUCK AWAY your Freedom. ✅ What you need to DELETE from your life to make space for Freedom! ✅ How to TAP INTO Freedom in any situation! ✅ What you’re consuming every day that BLOCKS Freedom. ✅ How to ACTIVATE lasting discipline so Freedom becomes a way of life. . This training call will be a fun-filled, content rich 30mins that will move you out of frustration and into freedom. You won’t want to miss this – there won’t be a replay. LIVE ONLY! . Note to the shy people: if you are an introvert and don’t want to show up on video on the call, no worries – you can turn your webcam off and still participate with the tribe on the call! Or just call in from your phone. . Tag a friend and come hang out on Wed the 25th at 5:15pm PST! (DON’T FORGET TO REGISTER WITH THE LINK IN MY BIO?) . Freedom is so possible, guys. I did it for myself and I’m excited to share the system I used so you can too! #NoMoreCages