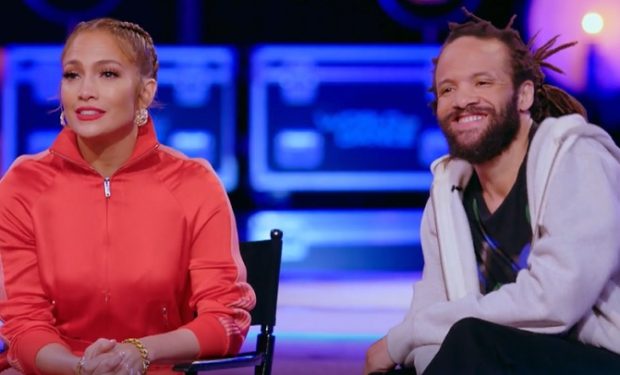 Jennifer Lopez and Savion Glover on World of Dance (NBC)

For the first round of Cuts on Season 2 of World of Dance, judge Jennifer Lopez brings in world famous tap dancer Savion Glover to help her mentor the dancers before their big performances. Only the top three highest scoring acts from each division will move on to the Divisional Final. Lopez was moved to tears watching the rehearsal of the junior troupe, The Lab. Glover called it “a fabulous piece.” And he should know.

[Gregory Hines wrote the forward to Glover’s memoir, My Life In Tap]

The 44-year-old tap dancer, actor and choreographer from Newark, New Jersey had the late great Gregory Hines as one of his first tap teachers. Glover made his Broadway debut at the age of 11 as the star of The Tap Dance Kid. (Glover was Alfonso Ribeiro’s understudy for the lead role, Willie. Ribeiro went on to play Carlton in The Fresh Prince of Bel-Air, win Dancing with the Stars, and is currently host of America’s Funniest Home Videos.)

At 15, Glover was nominated for a Tony Award for his role in the 1989 production of Black and Blue. Seven years later, Glover choreographed and starred in the musical Bring in ‘Da Noise, Bring in ‘Da Funk, for which he won a Tony Award for Best Choreography. World of Dance has moved to its new day and time – Wednesdays at 9pm on NBC.

Another sweet photo of Savion Glover with Gregory Hines…