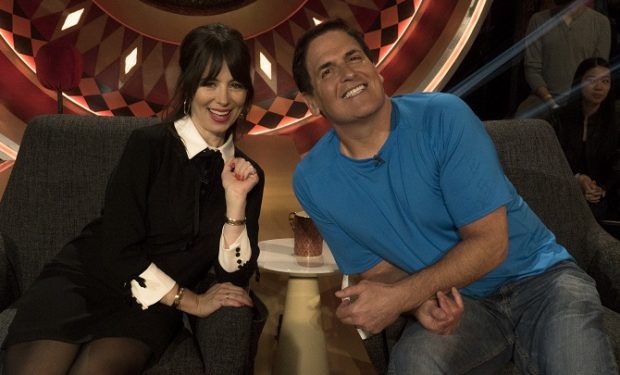 On Season 2 of The Gong Show, the judges are usually standup comedians or comedic actors but on August 9, billionaire tech guru and Shark Tank star Mark Cuban will judge the talent that dares to walk onto the stage. Cuban joins comedic actors Chris Sullivan (Taserface in Guardians of the Galaxy, Toby on This Is Us) and Natasha Leggero.

The super-talented Natasha Leggero is known for her roles on Another Period (Lillian Bellacourt), Dice (Andrew Dice Clay’s girlfriend Carmen), Suburgatory (Nora), Are You There, Chelsea? (Nikki Natoli), and in the films The Do-Over with Adam Sandler and David Spade and Let’s Be Cops (Annie), among others. In February, Leggero became a mom. She had a baby girl with husband, comedian Moshe Kasher. Fun fact: Leggero made her big screen acting debut in the 2001 film The Believer starring Ryan Gosling who plays a KKK member who keeps a secret (he’s Jewish!).  The Gong Show airs Thursdays at 8pm on ABC.

This is almost too many children ([email protected]) (bangs, baby makeup @missgiamarie)