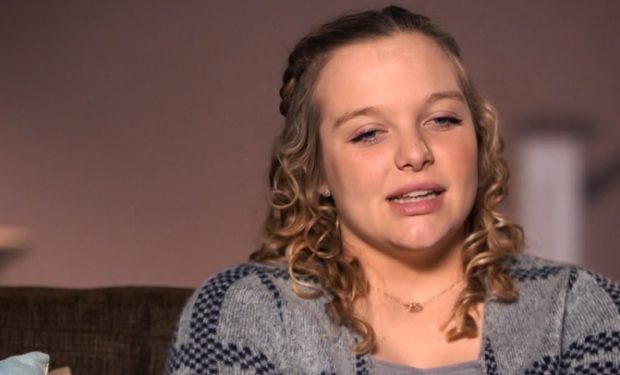 Emiley on The Unexpected (TLC)

On Season 2 premiere of The Unexpected, “Unsafe and Unplanned,” a handful of teenage girls talk about their lives before they got pregnant and let the cameras watch them during their pregnancies and after. While 16-year-old pregnant Chloe is staying with her parents, the father of her baby Max wants her to move in with him. He says he makes good money and that there are millionaires out there who have had babies as young as them. Meanwhile 16-year-old Lexus talks about her breakup with Shayden, father of her 9-month-old daughter Scarlett, and pregnant Emiley, 18, talks about her life before she lost her virginity with boyfriend Diego.

[Watch Season 1 of The Unexpected online]

Emiley was the cheerleader captain in high school. She played softball and did rodeo. She told her mother Bridget, 43, that she was going to save her virginity until she got married — but she didn’t. (Both Emiley and Diego were virgins.) Emiley says she and her single mom never talked about sex until she got pregnant. While pregnant, Emiley tells her mother that she is going to talk about sex with her future daughter no matter how awkward it is and promises, “I’m going to put her on birth control.” The Unexpected airs Sundays at 10pm on TLC, right after 90 Day Fiancé.