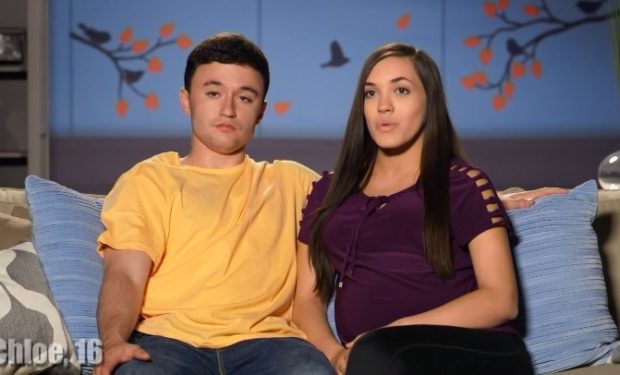 Max and Chloe on The Unexpected (TLC)

On the Season 2 premiere of The Unexpected, “Unsafe and Unplanned,” McKayla, 17, decides to move out of her grandparents’ house with her baby. Also on the show, Lexus, 16, reveals the details on her breakup with boyfriend Shayden; 16-year-old Chloe‘s boyfriend, Max, has a lot to learn; and 18-year-old pregnant Emiley is frustrated with her boyfriend, Diego.

[Watch Season 1 of The Unexpected online]

Chloe knew that her older boyfriend Max had slept with other people before they had sex. While she says she didn’t feel pressured by Max to have sex, she says she did it because she didn’t want to lose him. “He gets mad at me when I say that but it’s true.” Max says he wished she had told him that before they had sex, and waited until she was ready. Chloe laughs, “Would you have stayed with me then?” Max says “I could have definitely of waited.” He asks her point blank, “Are you glad now that we had sex?” She answers, “Obviously, I wish I would have waited but you can’t go back in time.”

Max then asks, “So you didn’t like it?” Chloe turns to the camera, “Oh my god, this kid is so insecure.” Chloe admits that they were not safe. “We were young and dumb,” says Chloe, and “it runs in my family.” Her grandmother, mother and aunt were teen moms too. The Unexpected airs Sundays at 10pm on TLC, right after 90 Day Fiancé.