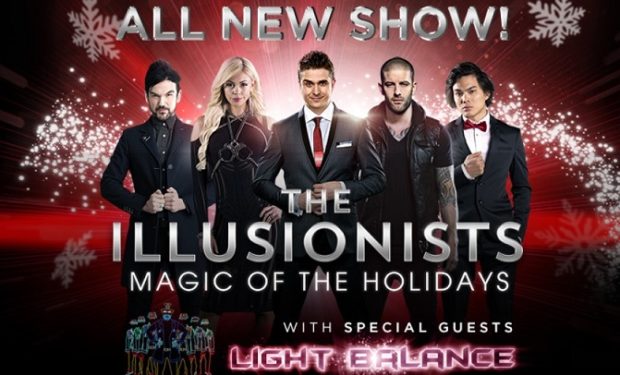 The Illusionists: Magic of the Holidays at Marquis Theatre

If you love magic and America’s Got Talent, you’re going to love The Illusionists’ new touring magic spectacular, The Illusionists – Magic of the Holidays. Performers include former AGT mind reader Colin Cloud (Season 12), close-up magician Shin Lim (Season 13), and the dance group Light Balance (Tyra Banks’ Golden Buzzer, Season 12). During the second night of Live Results on America’s Got Talent, the audience at Dolby Theatre will be treated to an elaborate performance by The Illusionists who are promoting their upcoming The Illusionists—Magic of the Holidays, which will play Broadway’s Marquis Theatre November 23 through December 30, 2018 in New York City. Ticket prices vary from $69 to $249.

November might seem far off — but it’s only three months away! And there are only 1611 seats at the Marquis Theatre compared to the 3,332 at the Dolby! [Fun fact: The Dolby Theatre stage is one of the largest in the country: it’s roughly the same size as the stage of The Elliott Hall of Music at Purdue University in West Lafayette, Indiana. Purdue’s music hall seats 6,005 — 100 more than Radio City Music Hall.]

The other members of The Illusionists are: Darcy Oake (The Grand Illusionist), Adam Trent (The Futurist), and Chloé Crawford (The Sorceress). And if you’re not into magic, you can reserve tickets for Tootsie the musical which is coming to the Marquis Theatre in February 2018. The AGT Live Shows on America’s Got Talent air Tuesdays at 8pm on NBC. Result Shows air Wednesdays at 8pm.