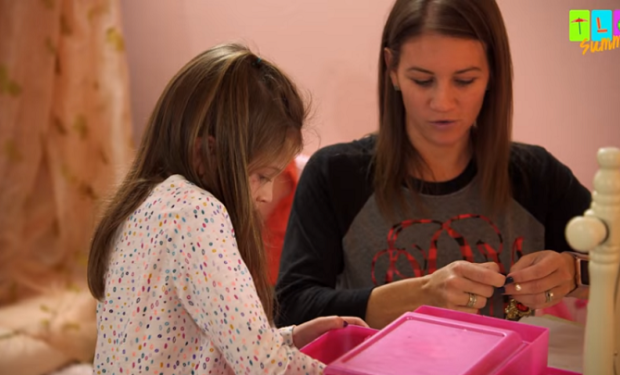 Danielle and Blayke on Outdaughtered (TLC)

On the Outdaughtered episode “It’s My Potty and I’ll Cry If I Want To,” parents of six Adam and Danielle Busby realize that not all the quintuplets are fully potty trained. Hey, they just turned three! While Danielle tries to get some work done around the house, she lets the quints hang out with big sister Blayke for a little bit. Fifteen minutes or so is all Danielle expects. In the episode, Blayke invites the quints to dress up like princesses and get makeovers. It doesn’t go smoothly.

The quints take over the makeup and smear it over everything – themselves, the furniture, the shag carpet. Danielle says, “Blayke loves her sisters but honestly she can only take them for so long before she hits her breaking point.” Adam and Danielle then step in and see what the quints have done to Blayke’s room. “I feel bad for her (Blayke) having to deal with how wild and crazy the quints are right now. She has to be, like, stressed.” Danielle is glad that they’ve enrolled Blayke in gymnastics, so she can have her own thing, even if it’s just for an hour. “She’s definitely earned it,” says Danielle. Outdaughtered airs Tuesdays at 9pm on TLC.