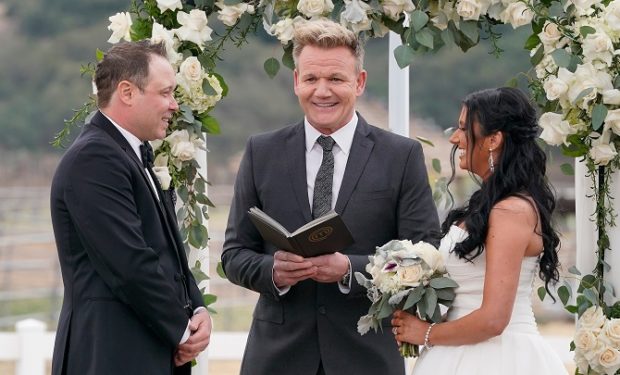 On the Season 9 MasterChef episode “A Gordon Ramsay Wedding,” the contestants cook for MasterChef Season 7 winner Shaun O’Neale’s wedding. The cooks are split into two teams to make appetizers and entrees for the 51 attendees. Celebrity chef Gordon Ramsay officiates the wedding which was held at a 1,000-acre ranch and vineyard in Malibu known as Malibu Wine Safari. Yes, fine California wine was poured and tall playful giraffes were fed after the happy couple exchanged I dos in front of a 250-year old weeping willow tree.

O’Neale proposed to his bride Katie Provost in October 2017. She’s not in the food industry; she’s a financial analyst from Las Vegas. MasterChef airs Wednesdays at 8pm on FOX, right before Gordon Ramsay’s 24 Hours to Hell & Back.

Surprise! It’s been a hard secret to keep but I am so excited to tell the world that I married the love of my life, my beautiful bride @katie14378 in the most amazing way possible with my @masterchefonfox family! Thank you so much to @gordongram for making this day even more special! I can’t wait for you to see the entire ceremony on July 11th only on @foxtv #AMasterChefWedding #ShaunandKatie #MasterChef #weddingday #malibu #happilyeverafter Photo by @weddingnature