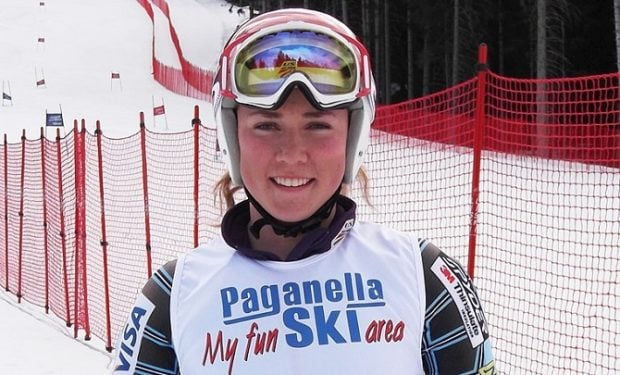 Retired professional racing driver Danica Patrick is hosting the 2018 ESPYS Awards in Los Angeles on Wednesday, July 18. NFL quarterback Tom Brady has been nominated for Best Male Athlete for the third time and Alpine skier Mikaela Shiffrin gets her second nod for Best Female Athlete. This time around, the 23-year-old from Vail, Colorado is competing against Olympian snowboarder Chloe Kim, WNBA basketball star Sylvia Fowles, and soccer player Julie Ertz. But what Shiffrin really wants to do is dance.

[Poster of Shiffrin winning the gold at the 2018 Olympics]

If you don’t believe, follow her on Twitter. She often posts videos of herself dancing. She admits to not being the best dancer but hey, she’s trying and expressing herself. Check Shiffrin busting a move at a race car pit, learning how to break dance, and giving it her all in a contemporary number to “Bad at Love.” If she doesn’t win Best Female Athlete, she should win Most Fun Athlete! The 2018 ESPYS will broadcast live on Wednesday, July 18 at 8pm on ABC.

Hi? me again… this time attempting to break with actual professionals… turns out I look even worsetrying to break next to people who actually know what they are doing! ?? pic.twitter.com/lJKHVzHulR

When @redbull is bumping that music in the pits… you have no choice but to BUST a MOVE. ?‍♀️?? pic.twitter.com/mE5UIFNWuN