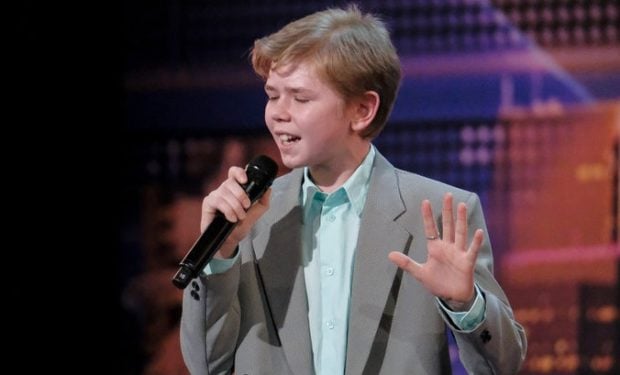 Maddoc Johnson aka Patches the rapper shocked everyone with his America’s Got Talent audition. First of all, the 13-year-old from Portsmouth, New Hampshire doesn’t wear the traditional garb of a rapper – he brushed his blond hair to the side and wore a collared shirt and blazer. And then he performed an original song which is about “the essence of performing.” He got four yeses from the judges and now he’s hoping to advance through the Judge Cuts.

[Stream the original 1969 The Who album Tommy]

[The original Broadway cast album from The Who’s Tommy]

When not on America’s Got Talent, Johnson is starring in the musical The Who’s Tommy as the young Tommy at The Seacoast Repertory Theatre in Portsmouth, NH. The show, which is based on the 1969 rock opera Tommy by British Invasion sensation The Who, is about a “pinball-playing, deaf, dumb and blind boy” who triumphs over adversity. Music and lyrics by Pete Townshend. The Who’s Tommy at the Seacoast is up until July 29. In the fall, Johnson will start eighth grade at Portsmouth Middle School where he plays trumpet in the school’s band. New episodes of America’s Got Talent air Tuesdays at 8pm on NBC, right before World of Dance.