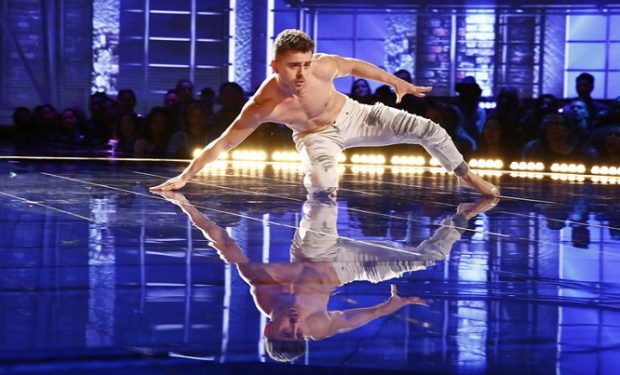 On the third week of qualifiers on World of Dance, judges Jennifer Lopez, Derek Hough and Ne-Yo are wowed by Australian contemporary dancer Michael Dameski. He brings a lot of experience to the show — he won So You Think You Can Dance in Australia when he was just 18 years old. For his first performance on World of Dance, Michael wears nothing but a pair of ripped pants and pulls off an amazing swan dive and then props himself up on his heels immediately after. He receives a standing ovation from all four judges. JLo tells Michael, “It was beautiful, dangerous and exciting.”

After Michael advances (he receives an average 92.7) to the World of Dance duels, host Jenna Dewan tells Michael, “That’s the highest praise I’ve heard Jennifer give.” She gave Michael the highest score: 95. (Dancers need just 80 to advance.) P!nk is a fan of Michael’s too. He’s in her “Beautiful Trauma” dance video below. (The boxer in the sleeveless grey sweatshirt.) New episodes of World of Dance air Tuesdays at 10pm on NBC, right after America’s Got Talent.