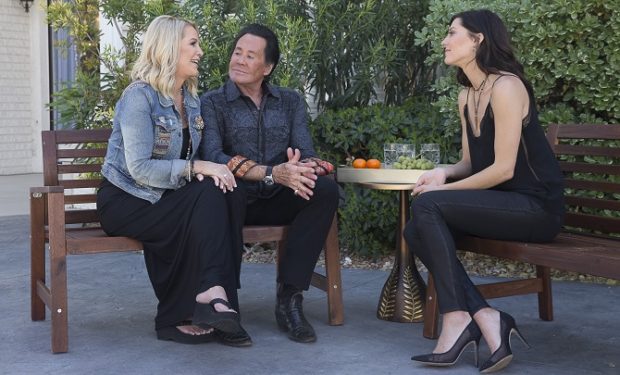 On the fifth episode of The Bachelorette, Becca Kufrin is halfway through her search to find true love. Feeling lucky, Becca and her suitors fly to Las Vegas. There she and Colton explore the desert, and nine fortunate bachelors get to visit Mr. Las Vegas, entertainer Wayne Newton, at his lavish estate. While the bachelors face a challenge of writing new lyrics to Newton’s signature song “Danke Schoen,” Becca has a heart-to-heart talk with Newton, 76, and his wife of 24 years, Kathleen McCrone.

McCrone, a civil and criminal litigation lawyer from the Cleveland suburb of North Olmsted, Ohio, is Newton’s second wife. They meet in 1991 at a Las Vegas performance. They got married in 1994 at Newton’s 53-acre ranch, Casa de Shenandoah. Newton was 52; McCrone was 30 (22 years his junior). They have a 16-year-old daughter together, Lauren Ashley Newton. Newton also has a 41-year-old daughter, Erin Newton, from his first marriage to Elaine Okamura. The Bachelorette airs Mondays at 8pm on ABC, right before The Proposal.

Photo below: Wayne and Kathleen’s daughter Lauren is to right of Lionel Richie…

Such a special night w/my family seeing my friend @lionelrichie incredible show. Thank you Lionel, @dannysalas227 & Bryan for the hospitality.