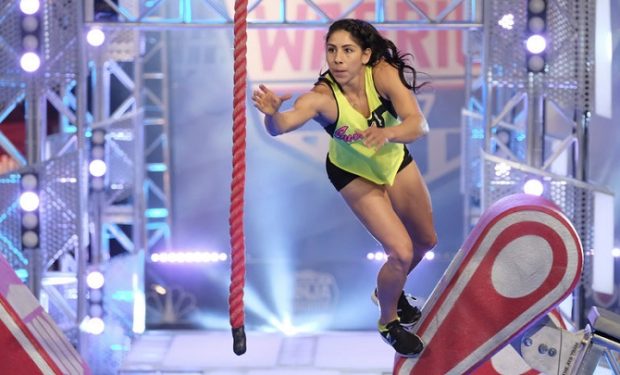 On the American Ninja Warrior episode “Los Angeles City Qualifiers,” many of the ninjas in the competition have day jobs. Adam Rayl is a concrete worker from Phoenix, Arizona. And Tiana “Sweet T” Webberley is still working as a waitress. But ANW host Matt Iseman (a former medical doctor) says Tiana is now supplementing her salary and tips with stunt work in Hollywood. So far, Tiana’s stunt credits include being a stunt performer on the set of the 2017 film Baywatch starring Dwayne “The Rock” Johnson (see link below) and on a recent episode of the new emergency drama 9-1-1 starring Angela Bassett and Connie Briton.

[Check out Dwayne Johnson and Zac Efron in Baywatch]

“We’ve really see her blossoming and coming into her own,” says ANW host (former NFL football player) Akbar Gbaja-Biamila. He predicts that this year — Season 10 — will be a big one for Tiana. He reminds the audience that 5’4″ tall Tiana when to college (Cal State) on a pole vaulting scholarship. American Ninja Warrior airs Wednesdays at 8pm on NBC.