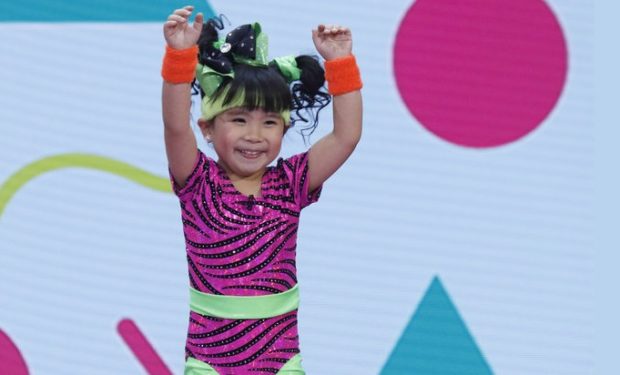 In the Season 3 episode of Little Big Shots, “Give Us S’mores,” host Steve Harvey meets a group of talented kids including a jazz pianist, a dog trainer, and an adorable fitness expert named Chandler “Cha Cha” Chen. Before working out, the 5-year-old Cha Cha reveals to Harvey that she has more than one boyfriend. The confident little girl then shows Harvey how to stretch. Wearing a sparkly pink-and-black striped leotard and matching leg warmers, Cha Cha slides onto the floor and does a split.

[Steve Harvey’s works out in Under Armour]

“If I do that, I’m in the hospital,” Harvey tells the audience. Cha Cha encourages the 61-year-old host to do a few jumping jacks instead, and he does! Cha Cha looks pretty surprised at Harvey’s abilities. Real story: Although Harvey, a former boxer, still smokes cigars, he’s actually in better shape now than he was 15 years ago. Check Harvey doing bench reps and “supersets” after doing his radio show and before walking on stage for his TV show (videos below). New episodes of Little Big Shots air Thursdays at 8pm on NBC.

We must keep a close eye on our time and health. If you run out of either you are in trouble. Supersets before my tv show and after my radio show. This is a strong 61!