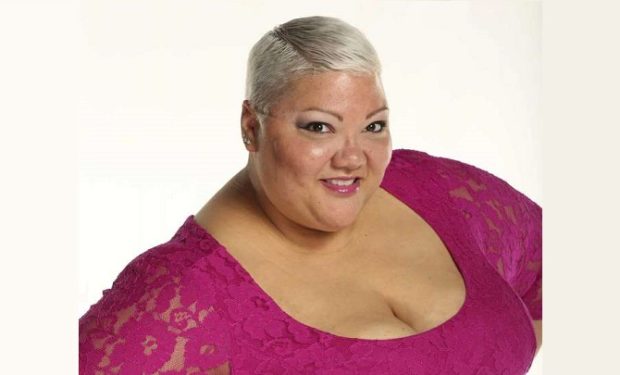 During the second round of Season 13 auditions of America’s Got Talent, two singers will stand out. Christian singer Michael Ketterer will share his story about how he and his wife Ivy have adopted five children from foster care. And 42-year-old mother of two singer Christina Wells from Houston, Texas will stun the audience with her commanding diva-like performance.

Christina is a Registered Nurse by day and a singer by night. She was crowned Pride Superstar at the 2016 Houston Pride Festival after singing the Hairspray song “I Know Where I’ve Been” which is performed by the character Motormouth Maybelle. (She and Jennifer Hudson have played the role before.) And if her singing wasn’t enough talent, Christina is also a seamstress! She sews her own dresses — for now…

I made this dress ? a few years ago and I wanted to give it a fresh new look so I used this gold material to trim and as a head wrap. I love the freedom sewing gives me to adapt my costumes and clothes to exactly what I want. Sew on my friends! #sewdressysewdiva #sewfun #sewhappy #sew #sewingproject

Christina says she learned how to sew “to save money” and still look fabulous when she sings on stage. And she’s succeeded. “I love creating looks that flatter my plus size body,” she writes. About a year ago, she offered to make customized dresses for others but it’s unlikely Christina will have time to sew for anyone but herself on Season 13 of AGT. America’s Got Talent airs Tuesdays at 8pm on NBC.

My newest project!! I am feeling red, white and cute!! I had bought the chevron material to make a new tablecloth but then my youngest son suggested I make it into a a “flag inspired” dress. And I just love it! So I will be wearing it to sing the Star Spangled Banner at The Pasadena Fourthfest! I hope everyone is having a great day! #sewdressysewdiva #singchristina #letfreedomring #sewingproject #sewfun