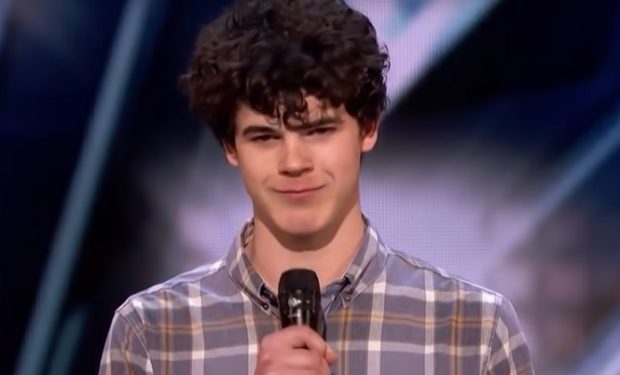 Jopseh O'Brien on America's Got Talent on NBC

On the fifth round of auditions for America’s Got Talent Season 13, a young man named Joseph O’Brien walks on stage. Wearing a blue flannel shirt and jeans, he introduces himself as a 20-year-old singer from Columbia, Tennessee. When supermodel Heidi Klum asks Joseph who he came with, he says he’s alone. Heidi keeps pushing and asks if he has a wife or girlfriend at home. Joseph says no, he’s never had a girlfriend. Heidi can’t believe the handsome young man hasn’t never dated. Nope, never been kissed or “snogged” as Heidi says.

[Lionel Richie’s “Hello” is on Can’t Slow Down]

For his America’s Got Talent audition, Joseph sits down at a keyboard and performs the lonely Lionel Richie song “Hello.” According to Joseph O’Brien’s Facebook page, his goal isn’t to sing secular songs about longing but “to write music that is centered around Scripture and inspires a generation to stand up for Jesus Christ!” Keep in mind, he is the son of Michael O’Brien, former lead singer of the Christian band NewSong. (Micheal O’Brien says America’s Got Talent not as family-friendly as he thought; see below.) New episodes of America’s Got Talent air Tuesdays at 8pm on NBC, right before World of Dance.

Son on left, Joseph OBrien, is on America’s Got Talent tonight. Watch with a clicker in your hand because it is not as family friendly as I thought. But Joseph’s performance is.