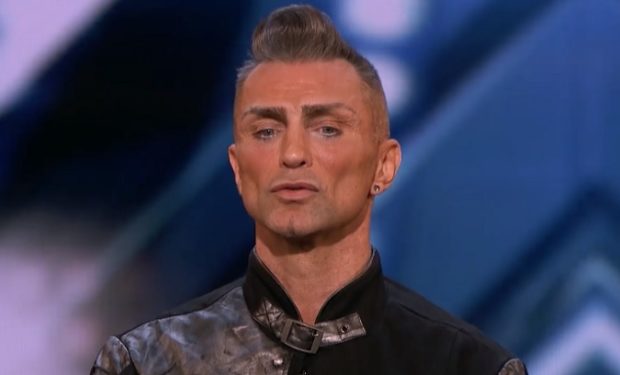 On the second round of auditions for America’s Got Talent, judges Simon Cowell, Heidi Klum, Mel B, and Howie Mandel meet Aaron Crow. He’s the mystery man in the long black cloak and impressive cheek bones who doesn’t answer their traditional questions prior to his performance – what’s your name, how old are you, where are you from? (He does reveal a smile when Mel B asks if he thinks he’s hot.) Aaron remains silent which makes his danger act more suspenseful. He pours hot wax over his eyes, wraps his head with gauze, black tape, and a sealed hood and then cuts objects in half — including a pineapple on the top of Howie’s bald head.

On his website, Aaron tells the story of being 3 years old when he got a needle stuck in his throat. He made a complete recovery but he can’t help but to think that the accident was “a sign of things to come.” Aaron went on to study Harry Houdini and his famous needle swallowing routine. Guess what Aaron’s going to do next on AGT! America’s Got Talent airs Tuesdays at 8pm on NBC.